Bianca Wallace, a 5’6 point guard, who fills very big shoes on the court, has gained much respect at Central High School. 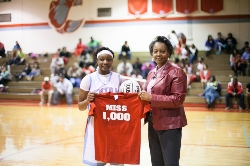 Bianca Wallace, a 5’6 point guard, who fills very big shoes on the court, has gained much respect at Central High School.

On 2/3/15, Central Lady Eagles played Cheraw Lady Braves at the Eagles Nest.  Bianca’s performance was great as she led her team with 25 points, 10 rebounds, 4 steals, and 4 blocks.  Bianca played both ends of the court well while controlling the basketball effectively especially at the end of the game.  Bianca joined the 1, 000 career point club during this game and was presented with a basketball and t-shirt for her accomplishments.

Coach Rhonda Wallace, Central Lady Eagles Head Coach, finds Bianca to be a tremendous asset to the team.  She is very coachable and takes the game serious.  Bianca is a team player and has potential that she has not yet tapped into. She is a very meek young lady that speaks positive on and off the court. Bianca is truly one of a kind.

Received All Region as an eighth grader and freshman.

Rookie of the Year Award Freshman and Sophomore Year.