Congrats to the Staff Member of the Month! 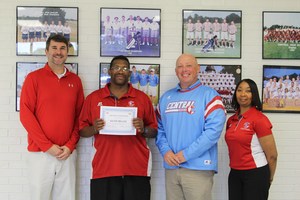 Kevin Miller, Custodian at Central High School, was chosen as The Staff Member of the Month for September at Central High School. Mr. Miller is a graduate of Central High School and has worked at the school for 6 years. Mr. Miller actually worked at Central when he was a student, so his first real job was working at Central. Mr. Miller said that his favorite things about working at Central are, “Central Eagle Sports, the cleanliness of the building and the friendly staff. He also said that Central was an excellent place to work because the job was perfect for him and he loves the hours that he works. When asked if there was any other job that he would like to have if he did not have his job at Central, Mr. Miller said that he would like to be a psychiatrist because he would be able to help other people. Dr. Starling said, “Mr. Miller is truly an asset to Central High School. He is dedicated to making sure that our students and staff have the best possible environment in which to work and study.” CATE Teacher, Courtney Brown said that, “Mr. Miller is always willing to help out in any situation. He always helps with anything that teachers need, and it is great that the staff and students see him at all of our athletic contests. Mr. Miller was recognized as The Staff Member of the Month for September and was presented with a certificate from the administration and a gift certificate from Beth’s Country Kitchen. Beth Knight, owner of Beth’s Country Kitchen, said that she was proud to be able to sponsor these awards for Central High School because she values the role of the school in the community.